One of the coolest places in Jordan - Wadi Mujib

We have a three day break this weekend, but instead of going out to some far away place, we decided to go to a little-visited place in Jordan - the Wadi Mujib nature reserve. If you read about it it sounds really boring - it's just a big animal reserve on the shores of the Dead Sea. It's really quite amazing though.

All along the shore of the Dead Sea there are fresh water springs that flow into the huge body of salt water - water coming from the mountains (but not from runoff - who knows where it comes from?!). One of the larger creeks is Wadi Mujib Gorge - part of the main reserve - which is a long hike up the river through a narrow canyon, ending at a tall waterfall. Immagine Petra's Siq with a fast moving river coming down, like the Subway or the Narrows hike in Zions National Park. Pretty amazing stuff.

We hired a mini bus from the Muhajereen bus stop by the 3rd circle in Amman. We negotiated the price for the whole day - 50 JD. Slightly ludicrous, but we only had a group of 5 (the three male BYU students in Irbid, Curtis, Stephen, and Andrew (aka Sami) came with us), so we took it. It was nice, since we had the driver wait for us wherever we went.

After about an hour drive we made it to the trailhead and paid the 7 JD per person. Once again expensive. Oh well. After paying we started hiking. We walked on man-made, metal bridges for a couple minutes until we came to the edge of a cliff with a metal ladder hanging down. Thus began our long, wet hike.

Stephen getting in the water 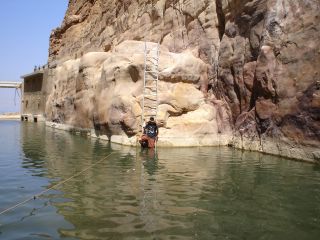 Beginning of the hike - notice the same rope from the previous picture. 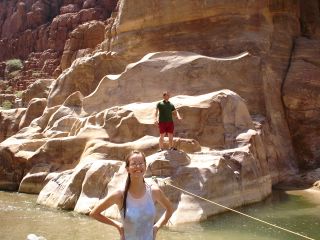 We had to swim twenty feet across to the other side of the river, where we could actually stand up and walk. We hiked in the shallow water for about 30 minutes, heading up the narrow canyon. The water gradually got whiter and rapider and deeper. We then got to some steep, small waterfalls/cliffs that we had to climb up.

Hiking up the small waterfalls 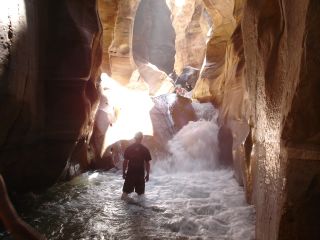 Sami stuck in one of the waterfalls 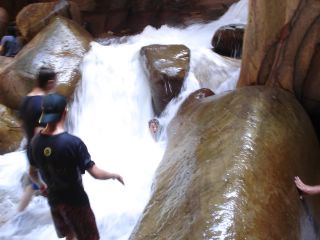 Some video of the beginning of the steep waterfalls

As we got closer to the main waterfall, the water got even faster and the cliffs that we had to climb up got higher. Ropes were provided on one of the difficult ascents. As we climbed, we took lots of breaks in the water, playing in the powerful mini waterfalls. 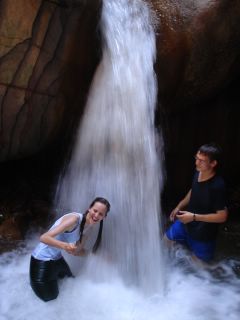 Me in mini waterfall 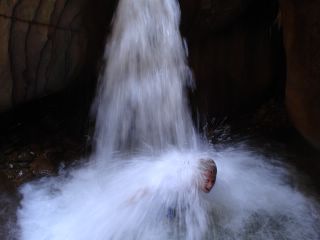 After climbing up all the rapid waterfalls, we made it to the main one, which was a lot more rapid and powerful than the other small ones (duh). We all had fun running through it, trying not to get knocked over or lose anything. Curtis's watch got ripped off his wrist - it's still up there somewhere (maybe we'll find it in our sink someday). Stephen lost his glasses, which Sami miraculously found under the pummeling waterfall. It was amazingly fun!

Me in the main waterfall 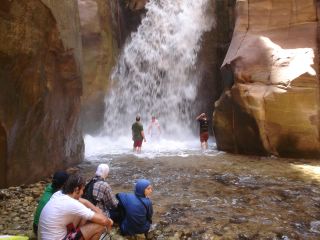 Us at the base of the waterfall 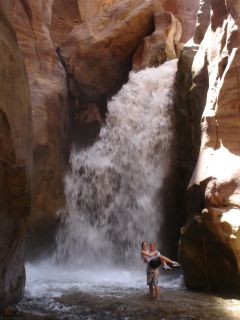 Us in a wall of very hard water 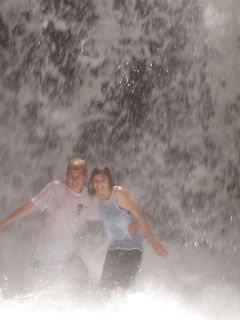 Me getting pummeled by the waterfall

Nancy falling in the waterfall 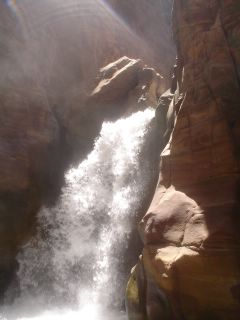 After a long while at the top, we headed back. This was a lot more difficult, and a lot more fun than coming up. The group that left before us took the ropes that we needed at the steep climbs, so we had to jump down some of them and slide down others. The undertow was really strong on some of the waterfalls, making it difficult to get away and continue. We were all completely bruised by the time we got to the end. My shoes didn't survive - too many fast currents, poweful waterfalls, twisted ankles, and big rocks.

That's Andrew's sock -
the sole had already floated down the river. 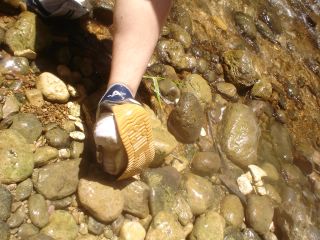 Once again at the beginning of the hike, we spent half an hour jumping back in the water from that first cliff with the metal ladder. The surrounding water was extremely deep and very warm - perfect cliff jumping water. Even Nancy jumped!

We then found our bus driver having a smoking/tea break with the guys at the trail head desk. We got back in the bus and went up to Amman Beach on the Dead Sea and met up with the Slades. We spent a little while floating in the Dead Sea again, but it wasn't as fun as the first time. We had so many stratches and scrapes and bruises from Wadi Mujib that the salt just stung. It hurt way too bad. I still love the Dead Sea, though.

Us floating in the Dead Sea 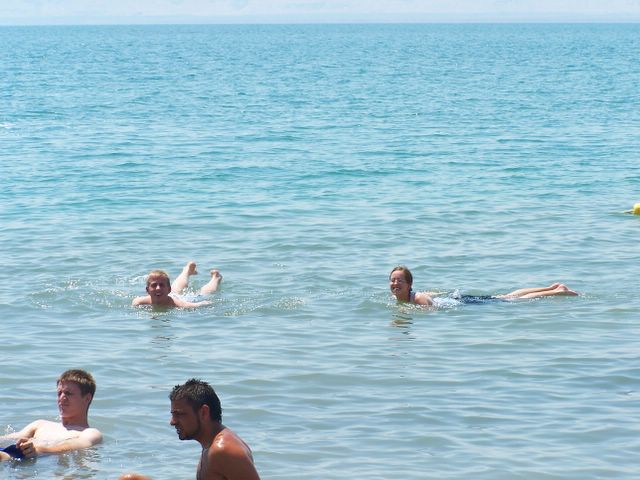 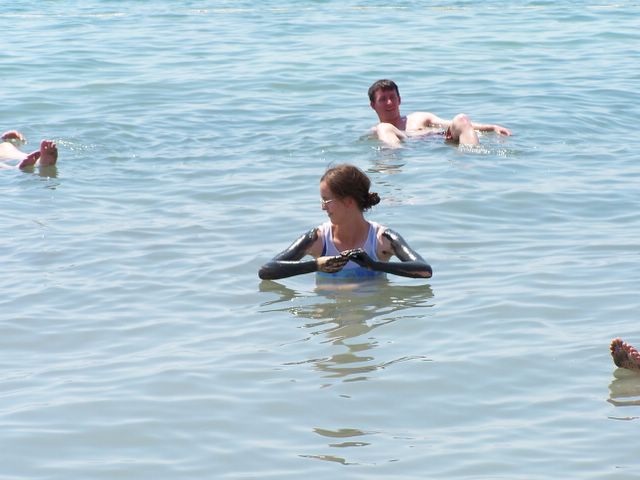 Us trying to get out at a very rocky/salty part! 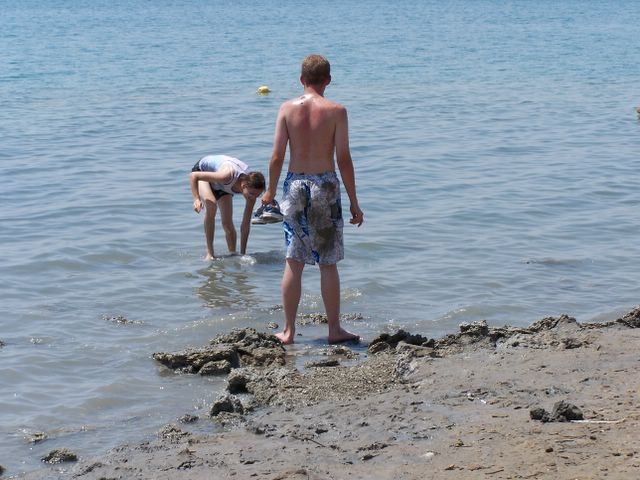 After a while there, we found our driver, once again chilling with the ticket and security guys - with tea - and came back home. It was an amazing day! We highly reccomend Wadi Mujib to anyone thinking about going! It's an incredible place! (Just don't go to the Dead Sea directly after...ouch!)
Posted by Nancy at 12:11 PM

Wow this sounds great.
I'm planning to go to Wadi Mujib after the Eid, and was wondering if there are any previous precautions or prerequisites that one should take heed to when thinking about going there?
Also, I plan on taking my nieces and nephews, (15, 14, 12, 4), what do you think about that?
One more thing, do I have to call and plan ahead of time, or is showing up enough to get in?

Think u have to be 18 to do siq trail

Think u have to be 18 to do siq trail