Jerash is one of Jordan's treasure troves; it's one of the best preserved Roman cities in the whole world. And I must admit, it really is very well preserved when compared to Rome. There were columns everywhere, the streets were original Roman-paved roads complete with underground sewage systems and ruts on the road. It's a complete ghost city. 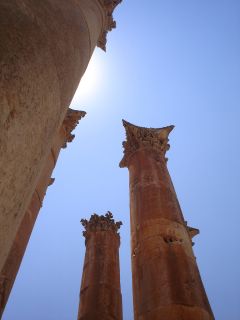 The first thing we came to was the hippodrome. It was kind of awkward because we bought our tickets at the gate and passed a sign that said, "Make sure you got your tickets." and then we were at a loss of where to go. We hiked up to this wall and then saw a break in it and so walked through. It was completely empty...so we took a few pictures and walked through another gate. At last we saw some people. They were selling tickets for a show. We decided to get them since we are residents in Jordan. Our admission price to Jerash was only 50 piasters (instead of 8 JD for tourists!), and the tickets for the show were only 5 JD (instead of 20 JD for tourists!). The show was really pretty cool.

The men in the show are in the Jordanian army (from the looks of it we think that some of them are retired) and they march well, although their lines got off quite a bit. They "spoke" Latin and had pretty good costumes.

I'll do separate posts for the other videos so that they don't take as long to load. The show was about an hour long. We first had the legion 5 come out, and then watched some gladiators fight, and then saw a horse race. All through the show, the soundtrack from the movie Gladiator was playing. Apparently the Royal Family here really liked that film and thus rennovated the hippodrome and ordered the horse races, actually hiring the people who helped in the Ben Hur chariot races to train the Jordanian Special Forces who are assigned to Jerash...at least, that's what we were told by Prince Firas bin Raad when he visited BYU campus last semester.
The Hippodrome 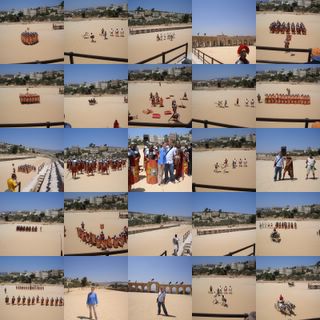 We had a fairly rough day. We just didn't prepare well at all. I wore flip flops for the first time this summer, which probably wasn't a very good idea. None of us put on sunscreen and we had only 3 little water bottles and 2 packages of cookies between the five of us (Me, Andrew, Jason, Crystal, and Ezra). Needless to say we got more and more dehydrated as we went...but it was pretty cool all the same.

We first walked to the South Amphitheater. On the way, Andrew pretended to be a column and I squished into a statue niche to prove that I could. (Ezra was standing in one...and so we thought that we would see if I could also be a statue. I can, by the way!) 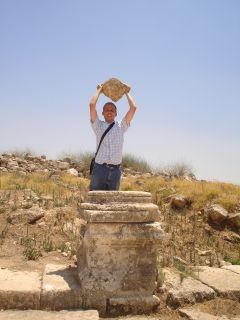 Nancy in a niche 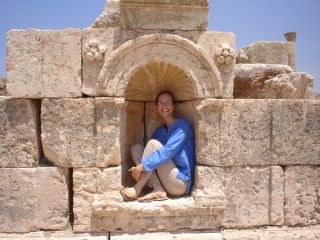 The amphitheater isn't much compared to the Colosseum or the amphitheater in Vienna, but considering the population of Gerasa at the time, and that there are 2 amphitheaters in the same city, it is pretty remarkable.
Nancy at the top of the Amphitheater looking out over the Oval Plaza 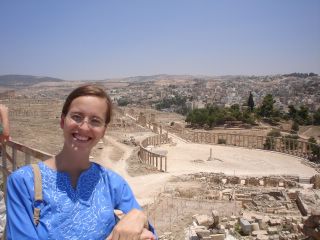 There is a wooden stage covering the original flooring because they were preparing for a big event in Jerash. Every year there is a Jerash Cultural Festival there where Arab musicians and artisans come and do concerts and so forth throughout the park. Unfortunately it was cancelled this year due to the war in Lebanon, since a lot of Arab singers are Lebanese (such as my namesake, Nancy Ajram). We were looking forward to going, but it was nice to go when the park was pretty unoccupied. 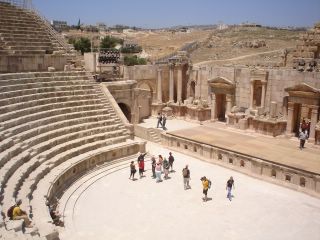 After the amphitheater, we hit a bunch of churches. Most of what's left of them is columns--there were so many columns! While we were in one of the churches the Call to Prayer sounded. There were so many mosques around (I think we spotted 5 minarets) so it was pretty crazy. It wasn't quite a mess as in downtown Cairo, but it was still pretty garbled. They were all going at the same time and I couldn't really hear the words from any particular one because they were all running together and echoing on the hills. It was really pretty cool.

For some reason we really liked the amphitheaters. The North Amphitheater was smaller but also very well preserved. The tunnels to get to the seating was really cool! When we walked in from the sunshine we couldn't see anything and almost fell down the staircase! There were also some really interesting reliefs on the seating.
Nancy on the Stairs 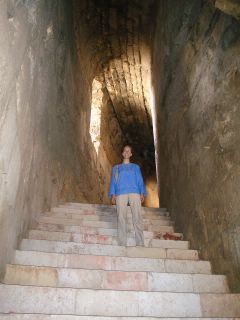 A fig tree happily growing in the tunnel at the North Amphitheater.
Hungry anyone? 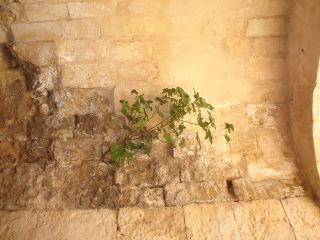 A carving on the seating of the North Amphitheater 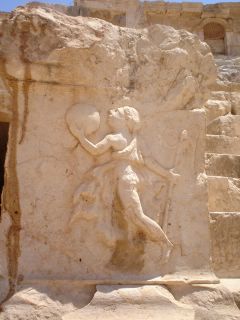 On the way out of the North Amphitheater we ran across a dead centipede. We saw so many millipedes and centipedes. I have never seen bigger bugs of this sort. They were probably as long as the palm of my hand and my fingers combined! 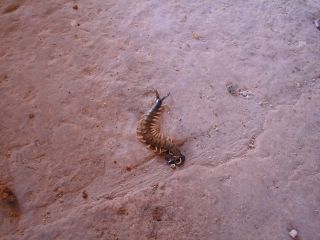 One of the last things we walked by was the elaborate Nymphaeum. Andrew had me pretend to be a nymph sitting in the fountain...I'm that tiny blue dot in the fountain base. 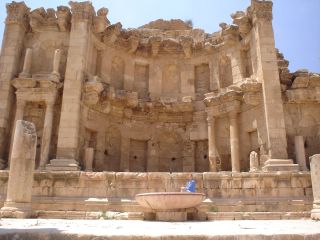 Well, now I'm jealous that we didn't see the chariot race. We had it on good authority that it was nothing special, but the way you describe it makes it sound awesome!

We were there later in the day...maybe that's why we missed you.