Yesterday at church we were given a security briefing. We were told that this weekend is a very pivotal weekend and that:
· Protests can erupt sporadically, especially around the University of Jordan depending on current state of political affairs. If caught in a disturbance, BYU personnel should seek safe haven inside buildings such as shops, restaurants, etc., until the incident has passed.
· Because spontaneously violent and planned protests are possible following Friday prayers, BYU faculty and students should stay clear of mosques and other areas where protest activities may occur on Fridays.

That pretty much takes away everything that we can do in the city. We aren't supposed to go to downtown, near mosques, the university, any place American...

It's all with good reason. Here's what happened downtown yesterday: 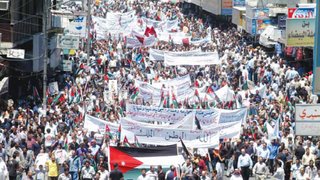 Newspapers here are full of pictures of the riots. You can look at al-Dustour and al-Ra'i (more al-Ra'i pictures)

We were also told to:
· Avoid all Palestinian camps and areas close to Palestinian refugee camps. Limit or cancel travel if necessary.

That means that we can't go explore outside of the city...which means that we are pretty much on lockdown. That's probably okay because Andrew has some homework that he needs to catch up on and I need to do some things, too. So...we'll be here all day.

Considering that Hezbollah has basically declared open war on Israel (not that I can blame them for that declaration), things have escalated quite a bit this weekend!

I'll have to wait for Andrew to get up so that he can translate the paper for me. Even though I now have a pretty good grasp on the alphabet and can follow along in Arabic when someone is reading, I have no clue what anything means. My vocabulary is very limited!

The newspapers all pretty much say the same stuff - Yesterday, outside of the King Hussein mosque in downtown Amman, thousands of protesters gathered after Friday prayers and filled the streets and chanted against Israel's agression against the Palestinian and Lebanese people. They also called on King Abdullah II to officially condemn Israel's actions and call upon the world community to do so as well.

The university riots last week were probably more violent, with the flag burning and all. Riots will probably continue this week as Israel continues to attack Gaza and Lebanon.