In the States, we buy cheap cereals, it's true, but we buy a nice variety of cheap cereals. Honey-nut Toasty O's would be a welcome change from Poppin's Corn Flakes. As would anything else on sale at Macey's! It seems like the only brand of cereal produced in the Middle East is "Poppins," a brand produced in Lebanon. They have other cereals, it is true, but they cost upwards of 5 JD a box for a 16 oz. box, which I think is pretty crazy. Poppins Cereal is relatively cheap; at least, the Corn Flakes are relatively cheap. Anything else is over a JD more and we haven't yet branched out that far. I'm holding my breath that this war between Lebanon and Israel doesn't cut our cereal shipments or we will have nothing to eat for breakfast. To be perfectly honest, I haven't eaten Poppin's Corn Flakes in a l-o-n-g time. I've been eating oriental noodles, fruit, leftovers, and anything else I can possibly think of besides Corn Flakes. I'm sick of them. Andrew, on the other hand, will dress up his cereal with "poo-cookies," honey, sugar, syrup, or whatever else he can find around the house. 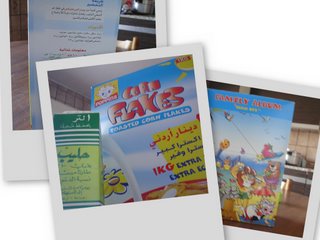 I suppose the cereal isn't too bad though. It can actually be rather humorous. It provides us hours of entertainment as we speculate about the "Family Album" on the back of the box; I also get in a lot of Arabic reading from that cereal box. It is fun to learn about cultural differences, too. For example, many people call cereal "cold cereal." Why? Because you eat it with cold milk...Obviously. 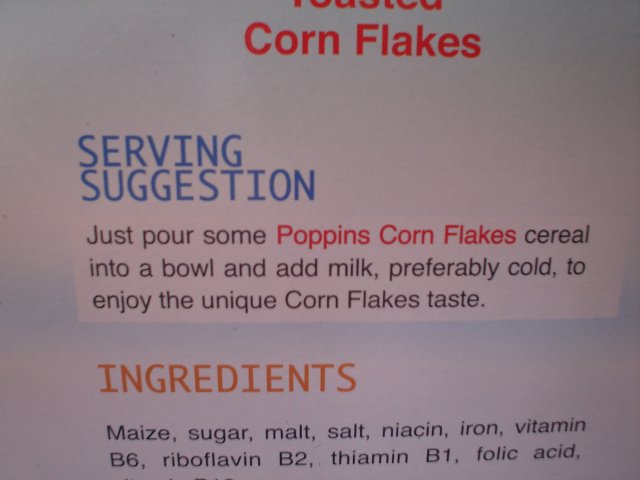 However, not everyone in the world likes their milk cold. The first time I had cereal at my homestay family's house in Russia, they boiled the milk and then put it on my cereal. I promptly told them that I liked oatmeal (if I have to have my milk hot, I want it on hot, pre-soggy cereal) a lot better than cold cereal.

Also in Russia, they think that if you drink a cold drink, you will get sick and die, or so I was told--so they always serve lukewarm or hot beverages.

And when Andrew and I had dinner with his Grandparents (who served a mission in Lebanon) and some of their Lebanese friends, I noticed that the Lebanese couple refused ice in their drinks because they preferred them to be warm.

To combat this warm-milk tradition, Poppin's advises that you eat your cereal with cold milk. I think that cereal tastes better with cold milk, so they aren't twisting my arm...but some people may take a little longer to jump on the band wagon.

I suppose that brings me to the topic of milk. Here in Jordan, the cheapest brand of milk is the no-name brand pictured below. As you may note, it really has no name. They call it MILK. It has no brand...they just let you know that it was made at the Jordan Dairy Co. and that it comes from cows. Even though the milk is pasteurized you have to watch for signs of expiration, not only the expiration date.

A few days before it really goes bad, it will start to smell like eggs. Then it will taste a little off. Then...well, we don't know the next stage because we usually end up tossing the last little bit in the carton. 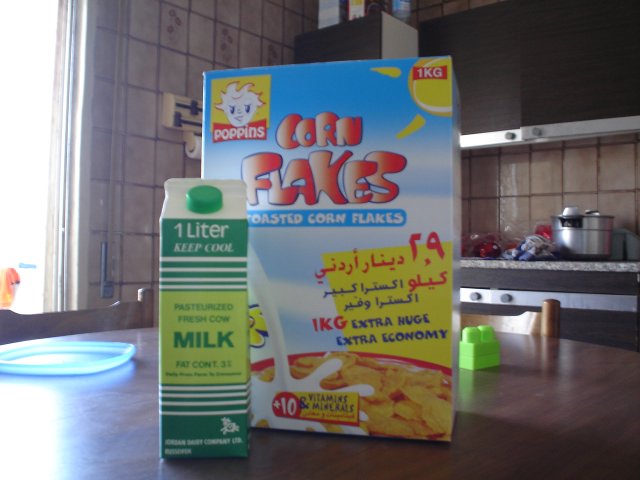 What I love about the Poppins Corn Flakes - well, really the ONLY thing I love - is that they come in a massive, 1 kilo box. Where else can you buy a full KILO of corn flakes??