While trying to enjoy our stay at Aqaba, I was constantly stressing about what time we were supposed to be at the ferry station. Kirk was supposed to SMS us the time, which he eventually did do...but I kept stressing out that we were going to be late and miss the group and then we'd have to try to find our own way to get to Egypt from Aqaba, which...after being at the ferry station...I know would have been crazy. As it was, we were supposed to meet at the ferry station at 10:00 am. We got there in record time: 9:45! And then, after gawking about how much stuff everyone had, we waited. I really shouldn't have stressed out at all since we waited for...like, 5 hours.

Our first sight of the ferry station 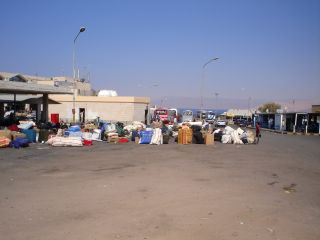 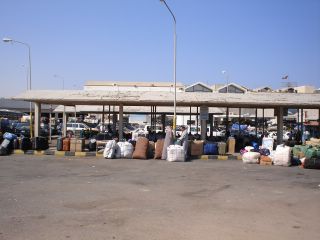 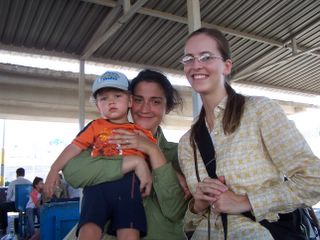 And you thought we overpacked! 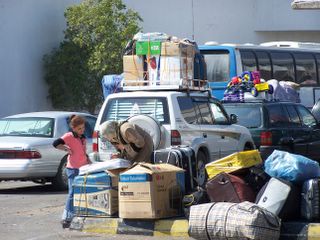 While waiting outside, Andrew met a very nice man who talked to him for about half an hour. He told him his whole life story and then turned around on the bench and ignored us for the next hour or so. Interesting. After waiting for an eternity, we went inside the ferry terminal, which was just as chaotic.

The ferry from the night before had been cancelled and so many families of Saudi (and other gulf states) teachers had to spend the whole night waiting for another ferry. They packed up for the whole summer, thus all the stuff. And they took our places on the ferry, thus the reason for our long wait.

Arab family sleeping in the terminal 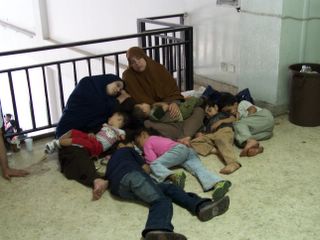 Finally, at around 3:00 pm they allowed us to board the ferry. We were really excited because you can only play soduko and do Arabic crossword puzzles for so long. Plus, Andrew was getting really bored. He started pulling faces at Ezra... 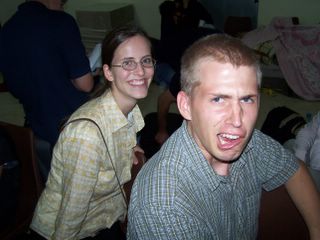 Finally we got our tickets and passports stamped and ready to go. This takes a long time when you are traveling in a group of approximately 50 people. They put us on a bus which took us to the ferry. We then loaded our own luggage in the hull of the ferry, for which we were very grateful. It was huge and we wanted to know right where our luggage was when we got off.

The chaos continues inside the ferry 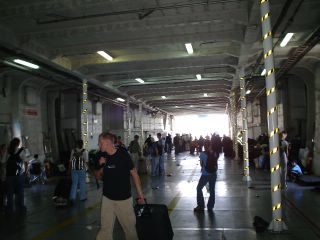 Unlike other ferries that I have been on, this ferry had plane seats. The ferries that I took when I did my Baltic Tour really didn't have much seating at all. I thought that having seats would help simmer down the chaos, but no. The seats are first come, first serve, so it took a while to find two seats together. Andrew and I were glad that the trip was only 1 1/2 hours long because Arab families have different disciplinary techniques than American families do. The kids were everywhere. Climbing all over the seats...running between the aisles, playing in the bathrooms, throwing food, punching each other, stealing food from other families...pure chaos. What do their parents do? Well, the dads go up top to smoke and the moms...chill. It was insanity. I tried just to sleep the whole time, and I'm pretty sure Andrew was still working on one of the left-over sudoku puzzles from our wait in the ferry terminal.

This really is the ferry 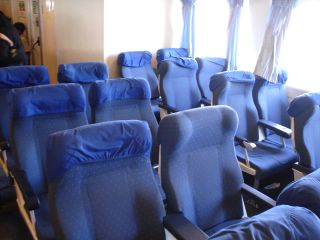 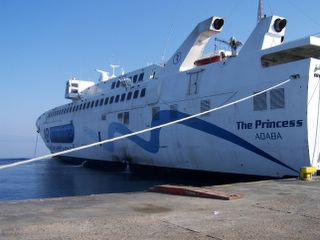 The Egyptian side was even more chaotic, if that is at all possible. Not to pass along gossip, but Ashley said that Bridget told her that in Egypt it was as if they had never had a ferry come by there before. And that is actually how it was.

Someone had taken all of our passports to go get them stamped and told us to retrieve them after we docked. When we docked, we tried to find the guy who had taken our passports but he was no longer on the ship. So, we sat around waiting for him. But then some other workers started telling us that we had to get off the boat so we headed to the stairs. When we were almost off the ship, a man asked us for our passports. We said we didn't have them. He said he couldn't let us off the boat. So we start going back upstairs and the men up there started yelling at us to get off the ship. The man downstairs is yelling at us to stay on the ship. So everyone is yelling at us and we're stuck in a staircase. Finally someone in charge (we think) told the guy telling us to stay on the ship to let us off.

When we finally all got off the ship, a bus picked us up...but then we had to drive around to all these random places...to get money, to get visas, to get the visas authorized, to go through security, etc. etc. etc. And no one could really tell us what was where. It was pretty crazy. Once we were on the bus with all of our luggage and passports in hand we were very grateful. At least our ferry didn't sink, but I can understand how one might...

Chaos on the Egyptian side 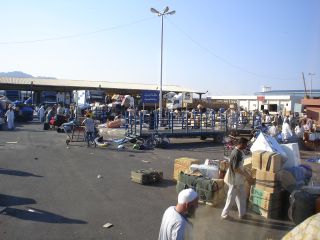