Welcome to the Land of Confusion!

When Andrew and I arrived in Khan al-Khalili, we were greeted with, "Welcome to the Land of Confusion!" I thus came to the conclusion that people must teach these poor street vendors random bits of English and that they are innocently going around repeating them. We heard things such as:

"How can I help you spend your money quickly?"

"How can I take your money?"

"I don't know what you are looking for, but I have it."

And so forth. I really hope that they don't honestly know what they are saying because when a merchant comes up to me and asks, "How can I take your money?" I really don't want to buy anything from his store and tend to keep a closer eye on my purse.

Everyone in Egypt is out to get an extra dollar. Taxi cab drivers will say that your ride costs 20 EGP when giving them 5 is too generous. If you run into a street sweeper, school child, or nearly anyone else...they will always end the conversation with, "Baksheesh?" Like they actually deserve something from you for giving you the time of day. It is quite amazing how many times we got baksheeshed for absolutely nothing. Often we refused to give the little "tip" they were asking for because it was absolutely ridiculous.

Egyptian economy, according to a local Luxor resident, revolves around agriculture, government work (such as policemen), and tourism. I would say that tourism probably gives them the most income since they rip off so many people. For example, an Egyptian buying a bottle of water gets charged 2 EGP (or less) but a foreigner would get charged 8 EGP. It really isn't that big of a difference, but you can tell that they earn a lot of money from tourisits. 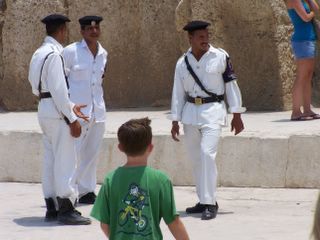