Unlike California, whose beaches are free and clean, as well as almost any other place I've tried using the beaches, the beaches in Aqaba are mostly private. The ones that aren't are filthy...and since these are pictures of the 5-star hotel "The Radisson" beach, I don't think that I would want to explore a public beach. There were garbage bags and other garbage-like things floating in the water but we went in anyway. The water was pretty warm, but fairly disgusting.

Ladies in hijabs swimming at the Radisson Beach 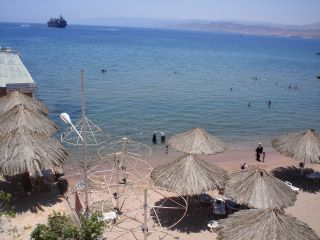 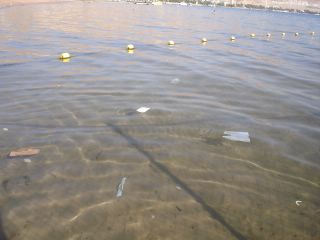 The Radisson was under construction so we kept sneaking on to their beach, only to be kicked off over and over. It was quite unfair that all these Arabs would go over and be permitted to stay on the beach but they wanted to charge us 5 JD a piece to swim there. I guess that's what we get for being so blatantly white.

Here we are though, in the Red Sea. 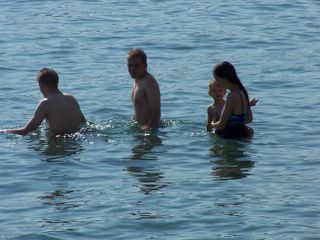 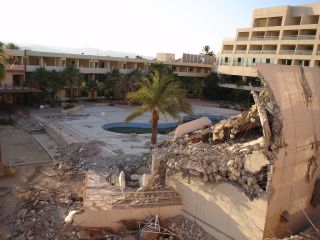 You may be wondering why we didn't want to swim at our own beach. Well, that's because it was virtually impossible to swim at our beach. Although our hotel, The Aquamarina I, advertised as beachfront property with seaside rooms (we opted for regular rooms to cut expenses), the beachfront was a little...non-existant. What you see in the picture is the beach. There is nothing more.

Andrew and I on the Aquamarina "beach" 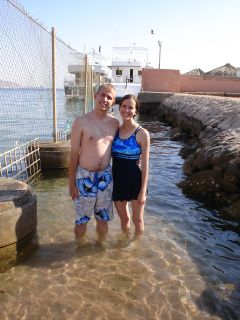 We did, however, have a nice (and slimey) salt-water pool that we could swim in. Our stay was nice...but...not quite what we were expecting. 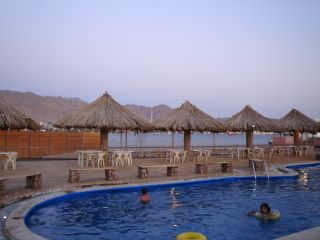 Our poor little hotel is smashed inbetween two monsterous hotels: The Intercontinental and The Radission. These beigger hotels bought up our beaches and thus, we were stuck in our little pool. It was nice to be able to swim though. And we did have some amazing views from the dock!
Me with Israel in the background 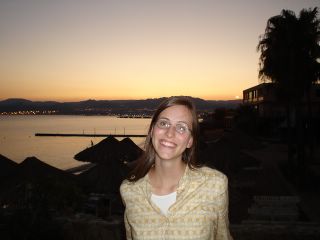 We also saw this flag from the dock. It looks amazing like the Jordanian flag but is missing the white star that goes in the middle of the red triangle; further more, the stripe order is messed up. When the flag looks like this it means one of two things. The first thing we thought of was the Palestinian flag. That didn't make too much sense because Jordan has a peace treaty with Israel and since you can see Israel from here, why would they fly a Palestinian flag? The second reason, which we learned from our taxi driver on the way to the ferry station, was that it is not the Palestinian flag but the flag from the Great Arab Revolt, which virtually all the other flags in the Arab world have been based on. Our mistake was an easy one to make. 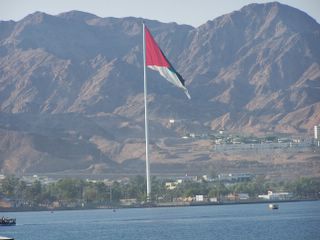