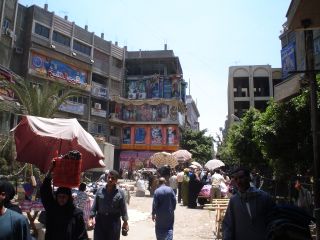 On our last full day in Cairo we went shopping for souvenirs at the Khan al-Khalili Suq. Apparently this is one of the hardest places to barter at: a fact that we found to be true. The shopkeepers would give us a price and we would give them ours and they would laugh at us, tsk at us, or just repeat their price to us. It was very frustrating. We did end up getting some good deals but it took a long time. For example, to get Andrew's gallabiya -a common dress for men- at a good price, we had to barter with the guy for about 20 minutes and then leave for about an hour and wander by again. He called us back over. We went and bartered some more, told him he was cheating us, and then left. We wandered by again and he almost gave us the price we were willing to pay (5 EGP more, but that's like a dollar so wasn't really a big deal).

Andrew in his Gallabiya and Agal 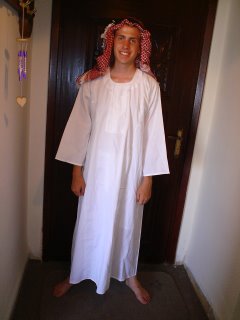 We also got some shirts for a good deal. The starting price was 75 - 95 EGP. We got them down to 15 each after quite some time. The shirts (and scarves as well as a bunch of other things) are quite easy to barter down since almost everyone in the street sells them. So, while Andrew was talking to the salesman, I would say that the price was too expensive and then walk down to the next vendor. Because I was moving on, the vendor that Andrew was working with would be more willing to give him a lower price. It was really hard and Andrew got in a lot of Arabic practice. Not as many Egyptians seem as eager to speak English as Jordanians are.

For lunch we went to the nicest-looking restaurant we could find to get Kosheri. It was delicious and looked pretty easy to make. We'll have to try making it when we get home. 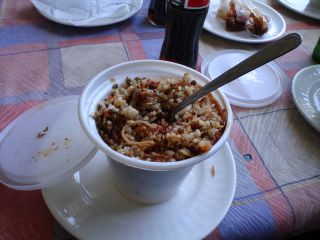 After lunch we went exploring in some smaller streets. We didn't find too many interesting things...but did run across an old Pasha leader's house who was Jewish. Apparently Egypt used to have quite the community of Jews--the house was fairly run-down so I'm assuming that was quite a while ago! 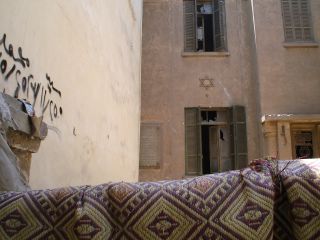 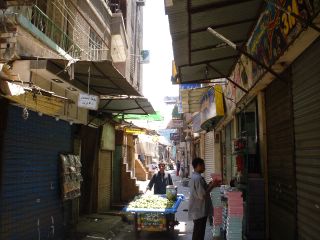 After getting bored with this street we headed back to the main Khan al-Khalili street. The police were making an announcement and people were scurrying to close their shops and head into the alleys. We are assuming that the same thing was happening there that often happens in Italy, as well as other places with high rates of illegal immigrants: The shopkeepers don't actually have permits so the police are coming to clean-house. They announce it first so that it gives people time to scatter (no one really wants to arrest all those people...) and then they do inspections. Interesting.

It was either that or it was siesta time. We doubt the latter considering the rate at which people were closing shop, but a lot more children were tending shops when we walked down Khan al-Khalili. They would call out, "This scarf...one guinea!" So we'd stop to look and an adult would call from the back of the shop, "It's not one, it's twenty!" I started "Ya-haram!"-ing children left and right and telling them they shouldn't lie. A lot of children looked rather apologetic, but only after my telling them that they were liars. I suppose if someone told me, "Oh, shame on you. You liar!" I would be a little upset...but that's really what they were doing and I really didn't appreciate it. Plus, it's one of the only things I know how to say.

Once when I said it to a child who pulled that same trick on us, his brother came out and said, "He's not lying. It's joke...funny." And I said, "It's not funny. It's lying." Andrew translated that to Arabic as, "It's not funny. He's a liar!" To which the Egyptian teen got really concerned and said, "Are you a Muslim? You can't say that...can you say that if you're not a Muslim?" Apparently it's a pretty harsh insult to call someone a liar because the Qu'ran speaks out against it. But since they were in fact lying, I don't see what they were so upset about. I suppose it didn't really offend anyone--it just shocked them and made them feel bad. In fact, I even made a few friends out of some of the little kids I reprimanded. It's a tough job, but somebody's got to do it.

At long last, we headed back to our hotel, went swimming, and then headed to Pizza hut to spend the rest of our money. We came back to our hotel room and watched the World Cup final game. It was pretty exciting...even with all the excitement, I fell asleep before the game was over.

We woke up the next morning and headed off to the airport where, once again, we got random names on our tickets and no one cared. Security definitely won't be that lax when we go back to the states!
Posted by Nancy at 7:01 AM