We read in our Lonely Planet guidebook that we should get to Petra as early as possible. Our hotel was in Wadi Musa and we had a free shuttle bus to the park. The park opens at 6 am, but the shuttle doesn't start running until 7 am, so Andrew and I got up at 6:30, went and ate our breakfast, and left on the first shuttle. It was a good thing that we did because, as you can see, we had the Siq all to ourselves. 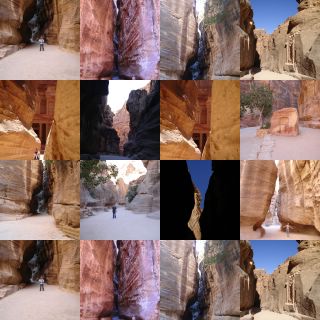 It was a relatively cool morning and we could just meander through the Siq (I think we took 40 pictures just in the Siq--it's only about a 30 minute walk). The Siq is cool because it isn't a canyon...it's one rock that was broken apart by an earthquake...that was one big earthquake. The Nabateans who built Petra sure were smart though. Not only did they build a dam at the Bab as-Siq to evade flash floods, something the Wild West never did think of, they build aquaducts to collect this water, bring it into the city, and store it. Smart! The pictures below are of the aquaducts. (Behind Nancy and the Statues is the aquaduct)
Statues...or Nancy? 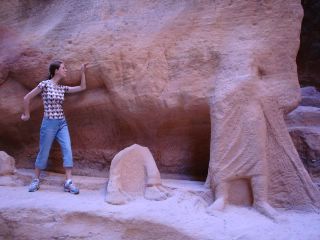 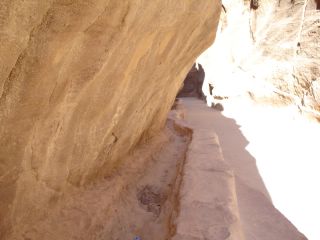 A Dam in the Siq with Aquaducts 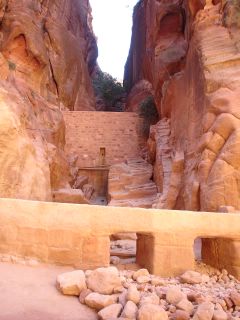 Nancy on a big rock above the Aquaduct 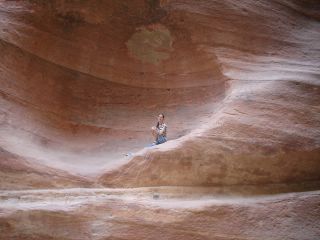 Andrew in a tunnel by the Aquaduct 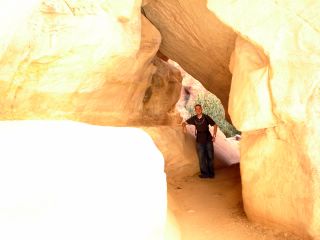 Near the Bab as-Siq there is an Obelisk Tomb. It is really pretty cool. At the beginning of your walk down a trail toward the Siq there are a bunch of little houses carved into the rock. Andrew and I explored those and thought they were pretty cool. Then we saw this...and thought it was amazing! (Until we got to the Treasury). 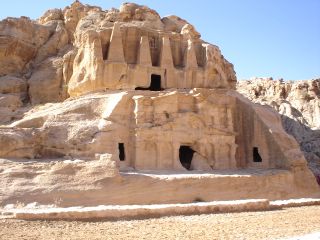 Al Bab as-Siq (The Door to the Siq) 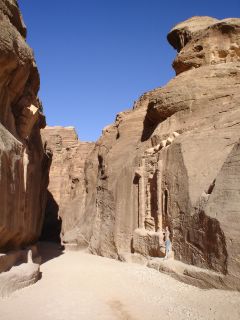 Andrew in a small tunnel 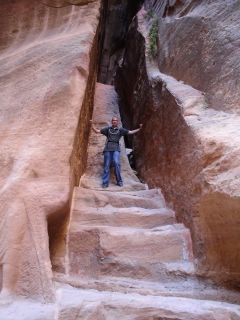 There are these carvings in the Siq pointing the way to Petra. The Siq was a major highway/trade route for the Nabateans they paved the road (which the Romans later re-paved with big cobblestones) and placed these signs so that people could find their way to Petra. The sign below happens to have a fig tree growing by it (fig trees grow all over Petra as well). When I was walking underneath it a fig fell and hit me on the head! 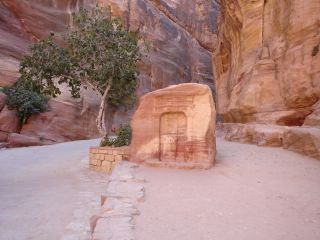 The sky in the Siq was such a nice contrast against the rocks! It was a stunning blue. Very similar to southern Utah. (Yeah...Kirk told us a day or a day and a half would be enough for Petra...what he didn't know is that Andrew goes to the same place in southern Utah every year for a week and loves it! Petra absolutely dwarfs Mesa Verde and Little Wild Horse Canyon and even, dare I say, Goblin Valley, as well as Writing on Stone...that should give everyone a little perspective. Andrew and I could definately have spent a week in Petra exploring every little thing! We still want to go to Aaron's tomb, hike down the backside of the High Place of Sacrifice, etc., etc., etc. We might just be going back...) 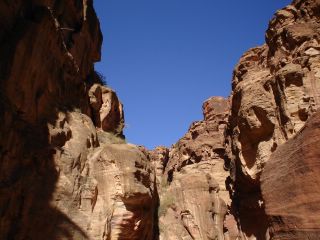