Here are Andrew and Jason: 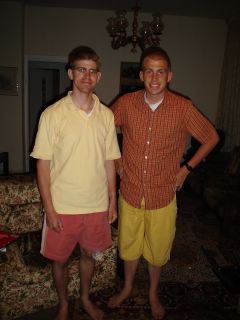 They do look quite a lot alike, but sometimes the similarity can be absolutely shocking. Like their coordinated orange and yellow outfits. Nice! (Ezra got sick yesterday and threw up all over Jason...so Jason went to change but couldn't find his shorts so he put on his swim trunks. Andrew thought that he would join him in his lounging.)

Everyone seems to think that Andrew and Jason are brothers. People here have difficulty distinguishing between blondes anyway and Andrew and Jason are both about the same height, etc. etc. etc. It's not just the locals that are confused though. It's the BYU class, too. On the first day the Slades were here, Andrew took Jason to class with him and everyone thought that Andrew's brother was visiting. It took them a while to realize that Jason is a student too. They still think that they are brothers though. Ezra is so comfortable with Andrew and I that people assume that Andrew is his uncle. Crystal and I obviously aren't sisters...so Andrew and Jason must be brothers.

Just the other day one of the BYU students explained to a group of Arab students that Andrew was not Ezra's dad, but his uncle. The locals here seem to always be confused why Crystal is so dark and Ezra is so light so they always ask for an explanation. For them, it is easier to assume that Andrew and I are the parents because we are both light, but it's not true.

I guess if they want to think we're all related, that's okay. Crystal and I are just hoping to perhaps teach some fashion sense somewhere in the family tree.
Posted by Andrew at 10:19 AM

Oh, Andrew, what have you done to the fashion world? Your "sense of fashion" has now spread to Jason--who knows where it will go next?