We were both a little more energetic on our second day in Petra. We did a lot more exploring although we technically didn't go very far. We pretty much just did the tombs...every single tomb. It was really cool. A lot of the tombs are now used by the Bedouins as stables, evidinced by the goat droppings, hair left over from shearing the goats, and the extra straw...it gives you that stable smell. They were still fun to explore in although you had to be careful of where you walked.

It made us think of the birth of the Savior...I really couldn't imagine being very happy about birthing a child in a hole in the wall that smells like the ones in Petra. It was neat to be in, as Andrew kept saying, The Cradle of Civilization. "The Cradle" is technically in Iraq, but we are really pretty close to Iraq. Andrew kept being really excited and telling me about cavemen and everything. Maybe he had a little too much fun. 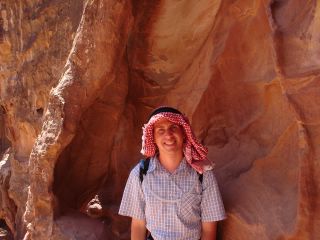 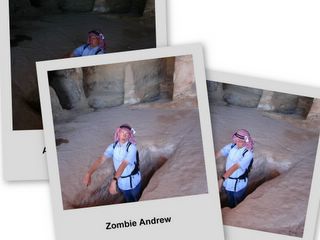 The first thing we did was hike up to the High Place of Sacrifice. We figured if we were going to do a long hike uphill then we had better do it first thing in the morning. It was a pretty easy hike-there were stairs most of the way, although it was still rather steep so we definately were slightly out of breath at the top. It was a rather pagan place...they had two big obelisks and a platform for sacrificial rites. We aren't sure what they sacrificed, but it was a pretty big table!

Nancy by an Obelisk 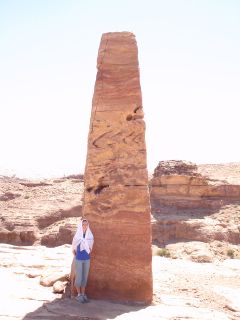 Nancy on the Sacrifice Table 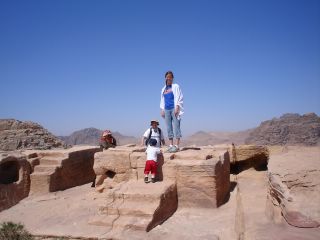 Nancy and Ezra on the Sacrifice Table 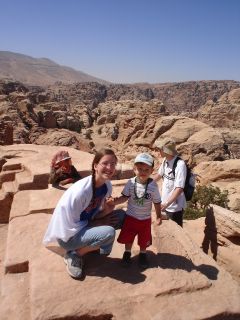 After hiking around the top of the High Place of Sacrifice we decided to do the tombs. There are so many tombs in Petra! We were going from tomb to tomb looking around and finally decided to eat lunch at this tomb. 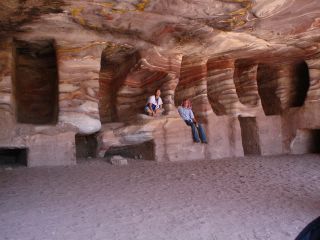 Andrew looked at his watch while we were eating lunch and was like, "Wow, it's only 9:45 and we're starving!" We figured that couldn't be right since we were at the High Place of Sacrifice at 9:00...so either we were really fast hikers or Andrew's watch stopped. After looking at Andrew's watch for a few seconds we realized it was the later. Since we had to be back at the hotel at 4:00 to catch our ride home, we found some people and asked them the time. It was...1:05 PM. Woops! Time really flew! There were so many interesting things to look at!
Nancy by a tomb entrance 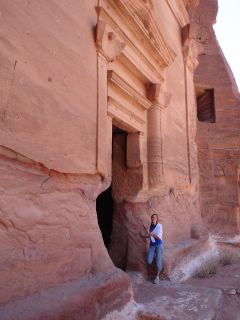 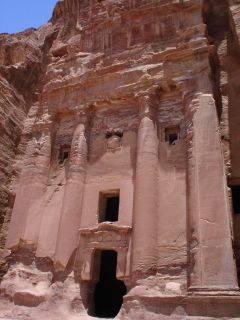 Nancy walking on a rickety bridge 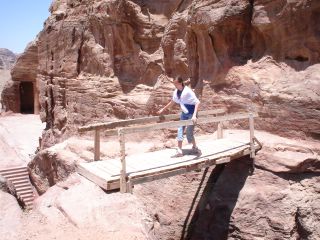 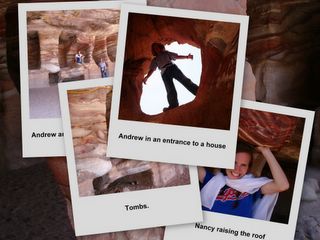 We took a lot of pictures! 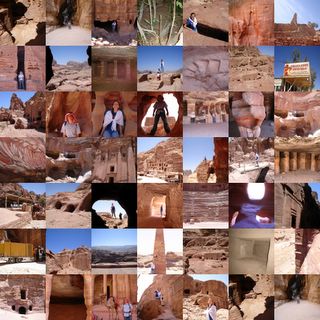 After walking around the tombs for hours we went over to the Amphitheatre. It was built by the Nabateans and expanded by the Romans around 100 AD. Those Romans can't live without theatres! It's a pretty cool theatre though. They didn't use any bricks in the steps, they just carved it out of the rock.
Amphitheatre 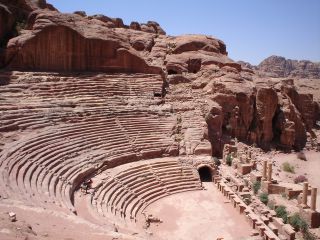 We climbed up to the top of the amphitheatre and went exploring in the caves at the top. The cave on the otherside of the theatre had a big dog in it, so we explored the side closest to the Siq. We found some really big houses with multiple rooms that were really cool. We also found some places that were still full of sand...completely unexcavated. The following two pictures are of the same house. 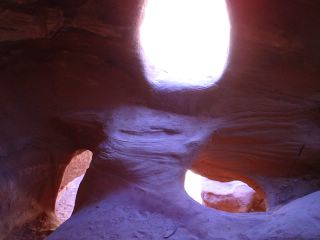 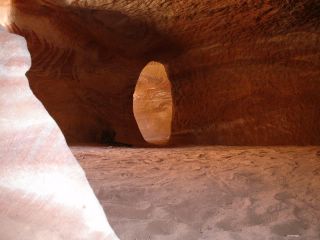 We were hiking down a canyon after exploring the less visited areas of Petra and there was this guy on a horse waiting for us at the bottom. He tried another Bedouin trick on us. After another man asked us to buy a lamp, they guy on the horse said, "You must be careful! I saw 2 fox from the top of the hill. You need my horse to take you to safety!" Andrew was like, "It's a 10 minute walk to the Treasury." The guy was like, "But the fox will get you." No offense, but foxes are like...really small...if he said wolf I might have been nervous. So, we ignored him and walked to the Treasury again. 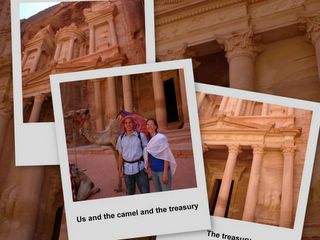 We walked back out through the Siq and when we got to the otherside, there was another Bedouin horseride seller waiting for us. "Hello Lawrence of Arabia. You need a horse!" Andrew was like, "Uh...no, I don't." So the Bedouin said, "For your wife...she will love you more!" Andrew said (in Arabic), "She wants to walk." The Bedouin said, "Yeah...good for her. She needs it!" It was pretty funny.

We got to the hotel about 3:45 so we had to wait for a few minutes for the taxi, and the Slades to come. The ride to & from Petra takes about 3 hours (with a pit stop included). It cost us 20 JD each way, but we split it with the Slades so it was only 10 JD each way. However, our taxi driver was a Bedouin, so do you think he would go down without a scam? No way. In English, Bedouin often carries the connotation of "phoney" or "foolish." Here they also rip you off.

So, after he dropped us off at the hotel on Friday, he hung around in the lobby until he had negotiated a return fare with us. He didn't want to take us home in the evening (bad business for him or something) - just in the morning. He told us that we could leave at 6 for 35 JD or at 4 for 20 JD. So, when he came at 4 on Sunday, we got in the car and drove up to Amman. Andrew didn't mention the price, since it was preneogiated.

On the way down he was happy and jovial and talkative. Going back to Amman was different though. Andrew tried talking with him and he brushed him off the whole time - something like "Wow! Petra was beautiful!" was responded with "Yeah, whatever...." It was a silent ride for Andrew.

When we got to Amman and got our stuff out of the taxi, Andrew whipped out a 20 and gave it to him. He yelled at Andrew, very offended, saying "I said 35 JD! You can't pay me that!" We argued with him for 5 minutes about the price. He got flustered and said "Fine! Don't pay me anything! Stupid Americans!" Andrew started walking away, content with the free ride, when a large group of Bedouin taxi and bus drivers surrounded us, trying to "rescue" their friend in "need." They told us sob stories about how the taxi driver takes care of a large family and that he would have never said 20 JD for such a ride. One guy offered to pay 5 out of the extra 15 JD. Our taxi driver was out of the group, trying to fake tears. We got tired of arguing, so Andrew stuffed the 20 in the "friend"'s hands and we broke from the group, got a taxi and drove home. As we walked away, they all started laughing, including our taxi driver. It was all a scam. They tried to rip us off, but failed.

So, that was our amazing Petra experience! We'll definitely try to get back there again while we're here, only next time, we won't get so ripped off. We know the tricks!

We'll be posting movies ASAP - Google Video has changed their policies on uploading videos recently. All videos have to be verified or something, which may take up to a few days, so, we're waiting on that.

If you want another point of view of our trip, visit the Slade's blog.

Ooh, I hate it when taxi drivers pull the "fine, don't pay me anything" trick. Works every time...almost :).

The Zombie picture is pretty much my favorite thing in the world! Andrew's so funny...