So, school is started officially, we finally have a semi-set schedule, and we should have a syllabus by tomorrow. It's been the most unorganized thing I've ever experienced.

We have classes at the University of Jordan (الجامعة الاردنية) in the Language Center, which is like the JFSB at BYU, where all the lanugage classes are taught. Most of the students around the building at foreign - there are a whole bunch of Americans from all over America, a huge group of South Koreans, and lots of Sweedish, Japanese, Chinese, French, British, and even some South American students, all learning Arabic. The Jordanians in the building take French or English.

Our teachers are actual UJ teachers who Kirk and Jeremy (the assistant director, PhD student at the AZ State in Arabic and my former Arabic 102 TA at BYU years ago - cool guy - most organized person on the trip) convinced to teach us. All the other foreign students take actual UJ classes, all mixed together, but since we're a huge group from the same university, we have our own classes. It's kind of difficult because we have to work around teachers' schedules, so we sometimes have class at different times each day.

Our group of 30 students is divided into 4 different groups - beginning, intermediate low, intermediate high, and advanced. We were placed according to how well we did in our Oral Proficiency Interview (OPI) that we did before coming, and based on how well we did on a pretest we did at the beginning of this week. I scored an intermediate low on my OPI, which is a lot higher than I expected since it was the first time I had spoken Arabic in about 3 years, and did pretty okay on the pretest.

Each group has their own teachers and schedules. I go to have my fusha (فصحى, pronounced Foos-hah, or formal, written, newspaper Arabic) class from either 11:30 to 1 or from 1 to 1:30, depending on the day. I then have my 'amiyya (عامية, or spoken, colloquial Arabic, which is completely different in every country) from 3 to 4:30 every day.

I'm relieved at the normalness because for the past week we haven't had set teachers or classes - we finally got divided today. Before today we just came to the Langauge Center and hoped that Kirk would tell us where to go. We never knew what time we had to be there.

He's not the most organized person in the world and hasn't helped any of us very much. I should dedicate an entire post just to him, but I probably shouldn't. He'll get better...

So, life out here in al-Husn (الحصن) is really quite cool. It's really in the middle of nowhere. The only problem is that it is so far away and it's semi difficult to get to Amman from here. I have to walk 15 minutes downhill from here to downtown al-Husn (the one street that has any stores on it constitutes downtown) and take a taxi into southern Irbid (a much larger city, about 1 million people), where I take a bus from there to Amman, passing al-Husn on my way down (the backtracking thing is slightly annoying, but necessary). I get off the bus right in front of the UJ. Coming home is also slightly annoying. I have to take a taxi from the UJ to the Abdali bus station because the Irbid bus doesn't pass by the UJ on the way home (why not I don't know...), but I get off in al-Husn and walk home. 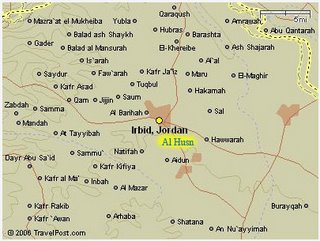 Amman and Irbid (close to Syria and Palestine) 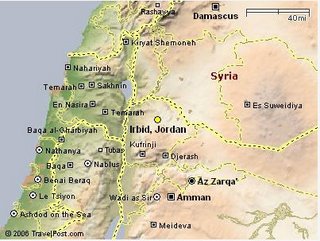 Irbid is in the Guiness Book of World Records twice, a fact that the natives are very proud of. It is the city with the most number of smaller villages around it, as evidenced by the map above with all the little places like al-Husn around it. It's second entry is even more important. Sharia Jamiya, or University Street, is the street that has the most internet cafés on it in the entire world. There is actually a tax exemption for anyone who wants to open an internet place on that street so they can maintain the high honor. What fame!

Well, it's getting late here, so it's off to bed now. We'll write more later, especially after Nancy's adventure today. She left the house and wandered around al-Husn all by herself today while I was at school and did some cool stuff. She'll write more about that tomorrow.