The Moral of this Story

This is one of those stories where you get to hear the moral first. And the moral of the story is: don't wait for like 2 months or more after you're done a trip to finish writing about it. Now Turkey is in this blur of planes and multiple countries and no sleep. It was a good trip, but honestly, all the days are kind of blurring together. So this post will be more like me describnig pictures and then if I think of any cool stories, they'll also be told. Unfortunately, I can't really recall which day we did what. Know that we were there. We took pictures. I just didn't write anything down until now. Oops!
Us at an architecture museum just off the hipodrome 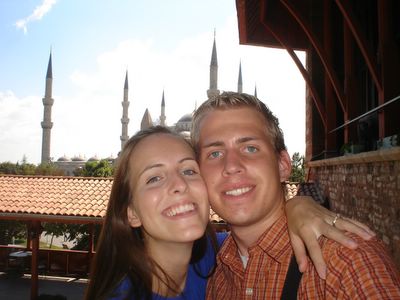 This was a pretty small museum, but it was pretty inexpensive, too. The best part was that it was in an old Ottoman style house, which is always quite nice and very interesting to look at. That's the Blue Mosque in the background.

There are little graveyards sprinkled throughout Istanbul. Most of them are of royalty. Some of them you have to pay to get inside to see the shrines for the kings. It's pretty cool, especially reading about them. Most of them did poetry. Most of the wrestled. A few of them had big noses and long beards. None of the plaques said anything really special about the kings--just that they wrote poetry when they weren't wrestling. 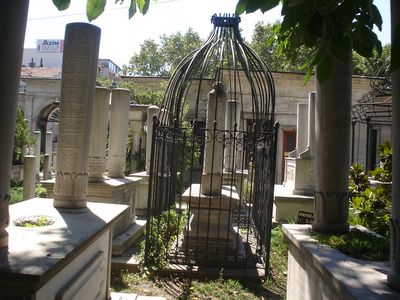 Andrew and I also went to the Grand Bazaar, a must-see in Istanbul. While we were walking there (it isn't far from where we stayed), Andrew described to me how he and his parents got lost trying to find it but really it was pretty easy to find and he knew right where it is. Well, we ended up by a mosque somewhere that had a nice park where we could consult our guidebook. Yup, it sure is hard to find. We had to ask someone how to get there. We did find it and it was really quite neat. 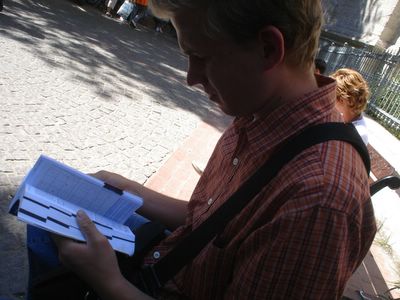 Well, we finally made t to the Bazaar, which is completely roofed. It's about 60 streets all walled in with roofs and doors and everything. The Grand Bazaar is the first market that Andrew went to in the Middle East. He was there about a year ago with his parents. He thought that is what the Bazaars were like all over the Middle East. So, when we first arrived in Jordan, and we decide to check out the Suq (Bazaar in Jordanian Arabic). We got in a taxi and Andrew asked the driver to take us to the Suq. So, he does. He drives us right to the center of the Suq, which happens to be an open-air district. Tons of shops, just like the Grand Bazaar, but no roofs over the street. Andrew was very confused. He asked the driver, "Where's the Suq?" the driver retorted, "Right here." We still weren't out of his taxi and made no movements like we were going to get out. I mean, here we are, fresh meat in an Arab country...like we're going to get out of a taxi when we aren't sure where we are. The driver gave a heavy sigh and says, "This is the Suq." He started pointing to different buildings saying, "That's a suq and that's a suq. Everywhere is a Suq." Yeah, the Grand Bazaar is quite different than the open-air markets we went to in Jordan and Egypt.

Inside the Grand Bazaar 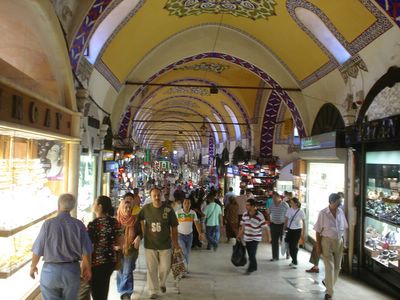 Stained glass lamps are a hot comodity over there! 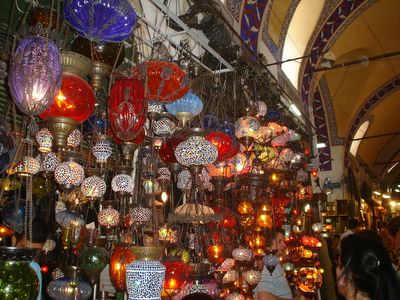 We went to some other museums. Right behind Topkopi palace, closer to the gardens where Andrew and I went everyday, there is this little series of museums. You buy your ticket at the gate and the museum, I swear, seems to go on forever! There were probably 5 different buildings that we went into, just full of artifacts (which were much better labeled than the Egyptian Museum in Cairo).

We weren't very impressed with the mummy though. This mummy is about 1/2 the age of the ones we saw in Cairo. And he has no skin. The ones in Cairo had skin, hair, painted eyebrows. It was pretty amazing to think that you're looking at King Ramses. That's pretty old. And he looked pretty good for being thousands of years gone. This mummy looks a little more like a skeleton. Of course, that is probably why Egypt is famous for mummies and Turkey is not. 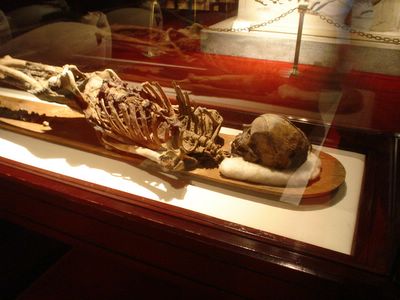 Oh, and here I am by a replica of the Trojan horse, not in Troy, of course. This museum had some really cool models of things--such as the Trojan horse. They had things from all over the place because the Ottoman Empire was huge. They have things from Jordan and China and, well, just about everywhere.

Me and my horse 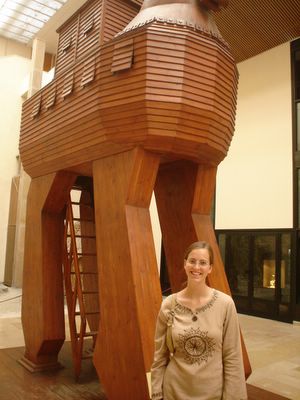 Dolmabahce palace could be a whole post in and of itself, except that we weren't allowed to take any pictures, so...let's just say this palace is grand! They have a chandelier that weighs a ton! I'm serious. It weighs 1 ton. They had to do some of the work in wood and paint it to look like marble instead of actually using marble because the palace is so huge and heavy that they were afraid it would sink into the Bosphorus. It's a valid fear because it sits on the Bosphorus. It kind of reminded me of my Grandma Conrad's house because a lot of the rooms were named after colors. Not that my Grandma's house was that big, but as kids, we would distinguish the rooms as "the yellow room," "the red room," "the blue room" and so forth because of how they were decorated. This palace also has a red room, which is quite noticably red, as well as a blue room. It has multiple wings for family (men and women in separate areas), the hammam (bathrooms--turkish baths are huge), and for guests. This took up pretty much half of our day. 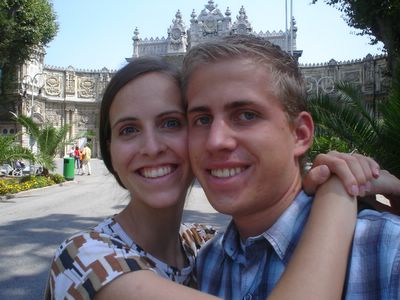 Hagia Sopiha is a sight for sore eyes. She sits right across from the Blue Mosque, which is absolutely brilliant . She doesn't hold a candle to it. She's red brick, comely...kind of boring. But then you go inside and it is a treasure trove. The stained glass windows are remarkable! And the art is really pretty cool. Hagia Sophia (St. Sophia) was originally a Christian church. It was taken over and converted into a mosque. Instead of destroying the original art though, the muslims just covered it up. They put plaster over the mosaics and hung wooden signs with arabic caligraphy over crosses. They turned some of the crosses into stars. It's actually quite remarkable what they did.

Here's me in a swirling mass of people 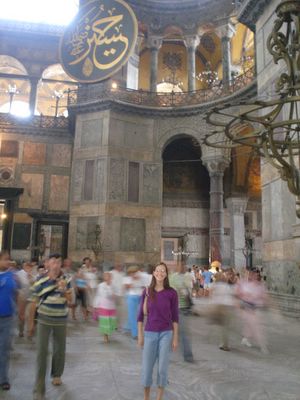 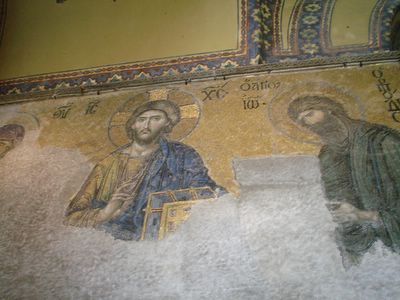 There is a pillar in Hagia Sophia that is said to bring good luck. Traditionally the soldiers would come to the church/mosque/what-have-you (I'm not sure what it's considered anymore) and would put their thumb on the pillar and then do a full 360 degree rotation. So, today people do the same thing except that now it is so worn down that you have to stick your thumb inside a hole that has worn through the copper plate and into the marble itself and then twist your hand around 360 degrees. 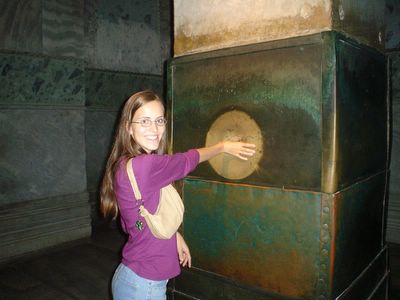 Istanbul is really quite a few islands. There's the European side and the Asian side, which everyone knows about, but there are also a ton of little islands scattered in between. Andrew and I decided to check out the beaches. We got off the ferry at the wrong time and went to some small-town island with 100% locals there. We didn't realize that no tourists were getting off the ferry until we had gotten off the ferry. Apparently there is a tourist beach that is actually pretty nice. Our beach was nice, too...but rather rocky. And, after our time in Dubai, no beach will ever be able to compete. So, we weren't very impressed with the beach, but it was really fun to get to observe the Turkish people. There were no cars on the island (that we saw). It was just a cute little island.
A little island somewhere within Istanbul 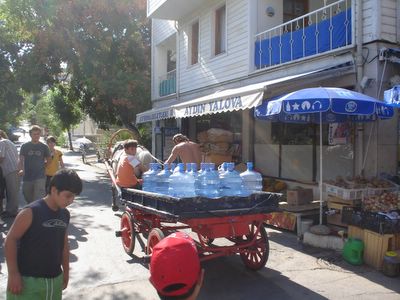 Andrew and I went on a cruise down the Bosphorus starting at the bridge by the New Mosque and going under the first Inter-continental bridge and almost to the second one and then back again. It was pretty cool. We had a party boat. Our captai was pumping some strange dance beat the whole trip. I memorized the chorus and could sing along at the time, I'm not sure I could now though.

Before the ferry ride we decided to take a walk on the bridge. They have little piers under the bridge with restaurants all over it. We should have known better than to venture down there because we were bombarded by waiters the minute we were in sight. We couldn't help it though. We wanted to take a picture of us on the Bosphorus. How much closer could we get than jumping in (which we had done when we went to the beach).

Us on the Bosphorus 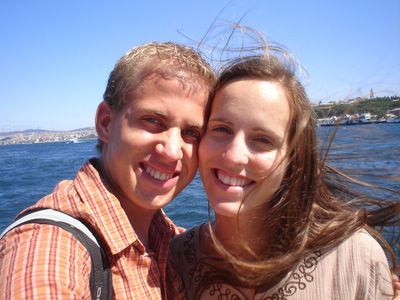 As we walked back to our hotel for the last time, I made Andrew take a picture of this house. People actually live in it. I was obsessed with the run-down houses in Istanbul. I couldn't believe the conditions people were living under! If that house was in America, it would be condemned for sure! 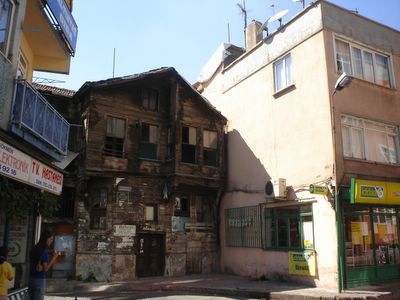 Here's a quick shot of our hotel lobby. The hotel is actually an old Ottoman style house, nestled in a ghetto...note the picture above. But it was really cool! The electricity was shoddy, but the architecture was neat! 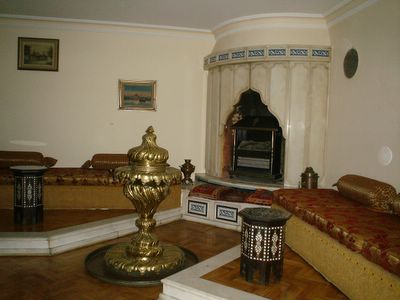 At long last, we left Istanbul and headed back to Amman, thus beginning our 3 or 4 or 5 (I really can't remember) run of sleepless, bedless nights. When we arrived in Amman, we decided to visit the falafel dudes one last time. They were so shocked to see us. It was awesome! They were pretty worried, too. They were afraid our flight got cancelled and we were stranded...after we convinced them that we were okay, they let us eat.

When we were leaving, Mohammed (the 13 year old kid who works there) kept pretending to cry and saying, "Oh, I will miss you. Sniff, sniff." I personally think that he was fighting back tears for real. I know I was. It was hard to have to say goodbye a second time. Leaving home is always hard no matter where home is. 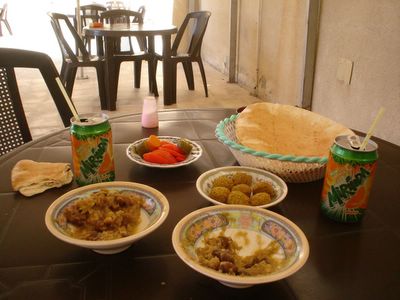 After lunch we went to Mecca Mall to get another Cinnabon (they're the second-best in the world! Who wouldn't?) and some books to read on the plane. Arabs just aren't readers. I had assumed that they would be, but they aren't. It was hard to find a good bookstore there. After we felt that we had wasted enough time, and were so tired because we had been up for 48 hours, we went to the Steed's house and crashed for a few hours. Sleep never felt so good! But, alas, the few hours soon expired and we were off to find a taxi and take all of our luggage to the Abdali bus station.

Yes, leaving was definitely hard. I fought tears saying goodbye to the Steeds. I fought tears on the bus. Sometimes I really just miss living over there and wish that I could be there right now. Other times I sure am glad to be home! Home...it's such a strange word. Home is everywhere!
Posted by Nancy at 11:41 PM